No trip to England would be complete without a visit to a castle, right?  We're going to visit Buckingham Palace.

The palace, which was built in 1702 by the Duke of Buckingham and later sold to King George III, is Queen Elizabeth II's official London home.  It is also where official and ceremonial occasions are held.  You can tell when the Queen is home by looking at the flagpole on top of the palace.  When she is there her special flag will be flying.
The palace is guarded by special members of the British Army.  They are not just prop actors in costume but actual guards from different regiments who all take turns keeping their Queen safe.  They all wear a similar uniform - black pants, red tunic and a very distinctive tall, black bearskin cap!! Since the kids have a castle they play dolls in, I thought the castle should have a few guards.  Our next project :  The Queen's Guard ! 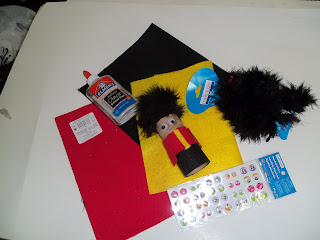 For the project you will need: 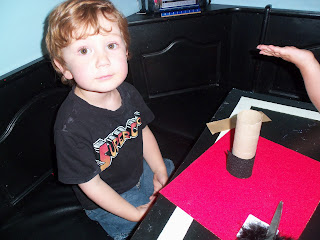 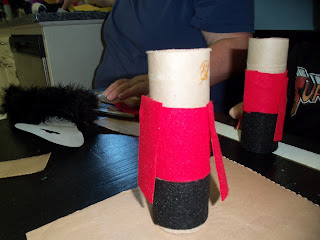 Next glue,stick or draw on some eyes and a mouth. The guards aren't supposed to smile- they are always very serious, but my son's ended up with a big smile :) For the hat we glued some of the fluffy boa onto a piece of felt and stuck it to the top of the roll.  Sorry, I missed that step in the photos!  Then, voila! 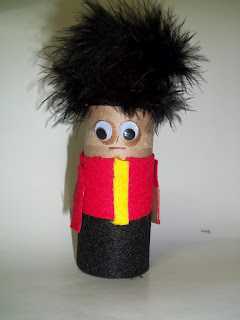 Isn't he cute?  The kids and I each made one and now our castle has it's own regiment of guards.  Barbie will sleep safely tonite :) 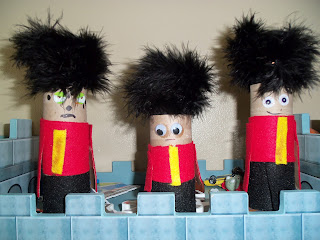 Seen by millions of visitors each year, the crown jewels are kept in the Tower of London, where they have been kept under guard since the early 14th century.  The collection contains the ceremonial and symbolic sceptres, orbs, rings, swords, spurs, bracelets, and robes that have been used in the coronation ceremonies of British rulers for centuries.  The oldest piece is the 12th century Anointing Spoon which is used to anoint the newly crowned king or queen with holy oil.  The jewel in the crown (pun intended) of the collection is St. Edward's crown.  Last worn by Elizabeth II during her coronation on June 2, 1953, it is made of gold and decorated with sapphires,tourmalines,amethysts, topazes and citrines!! 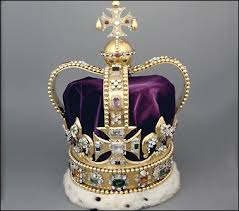 Our project, while equally as beautiful (yeah right) will cost you only a fraction of the cost of this beautiful crown!  You will need: 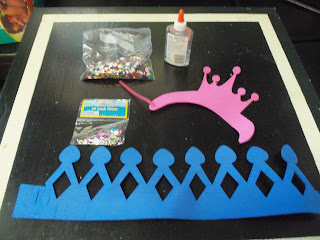 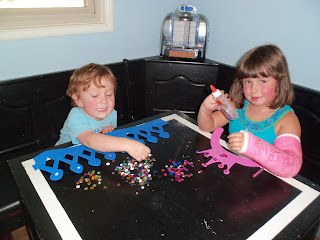 You probably already guessed it.  Glue the gems and sequins to crowns and let dry.  Then have an elaborate coronation ceremony complete with parades and fireworks to celebrate the crowning of the new King and Queen!! Or just make them pose for a picture. 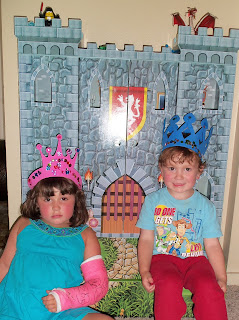 Three cheers for the new King and Queen!!  The queen looks like she's about to have me beheaded!! Someone tell her our next post has treats ...

Project 2: The Queen's Guards No trip to England would be complete without a visit to a castle, right?  We're going to visit Bucki...

What We've Been Doing...